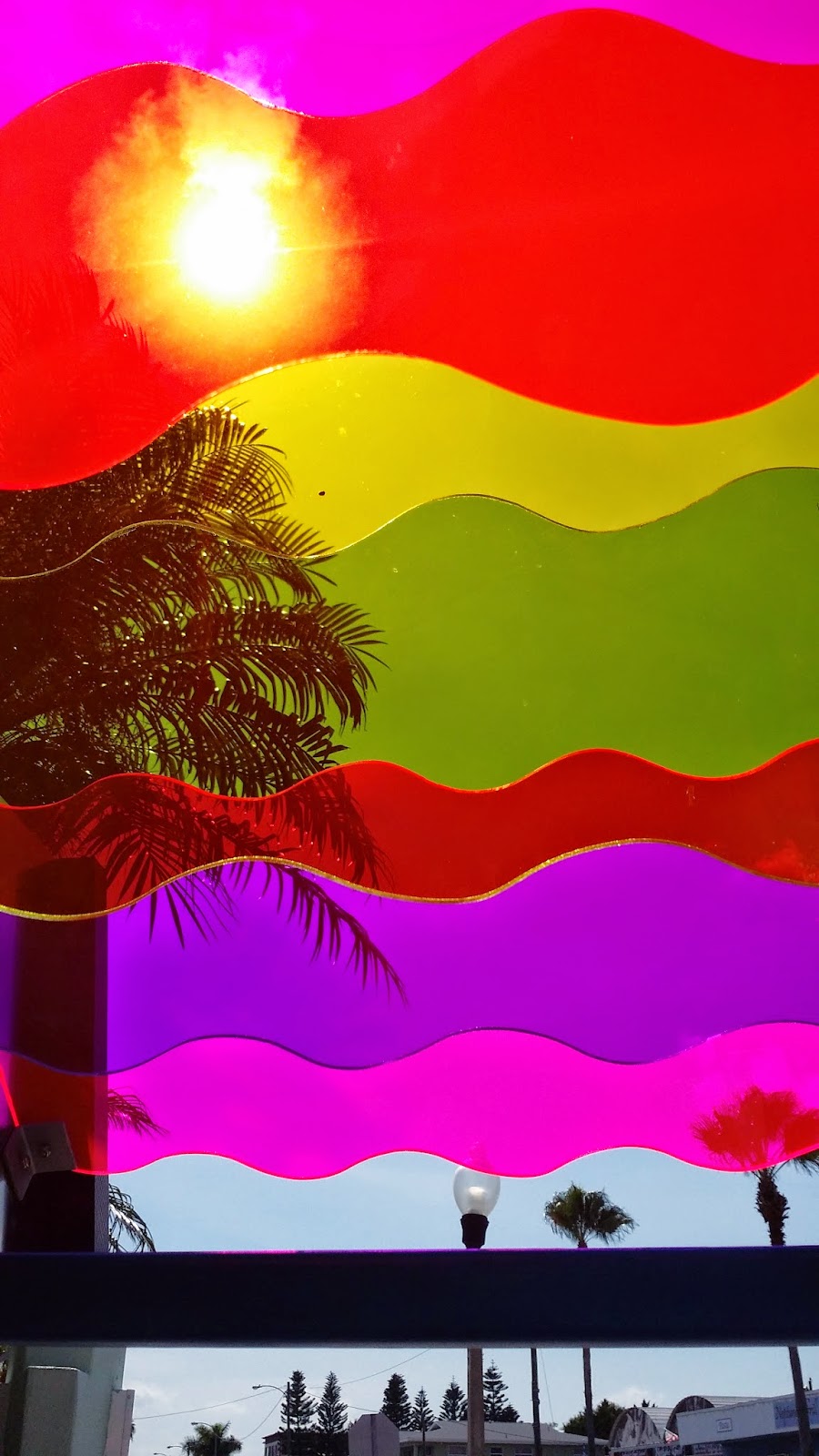 To cross the Gulf, be our port of call leaving
a wake of peace and love for all;
All hands together joined to Row
Make rainbows of gauntlets as they go.


African American Artist Stephen Oliver's "Best Kept Secret," a brushed steel sculpture was installed in Gulfport, Florida on Friday, July 18, 2014.  That is only  a fraction of the story.

The sculpture stands before  the city's National Landmark, the Gulfport Casino,  not a gambling establishment, but a community events building that spans several historical eras including the years of segregation and intolerance in the South.  Today, Gulfport is an artful, progressive, welcoming town, known for all of those attributes and the diversity that makes it dynamic. "Best Kept Secret" was inspired by the people and the journey of Gulfport.

In an interview with the Tampa Bay Times he said,

"That change, that growth in the community is what I want my sculpture to celebrate — a synthesis of Gulfport's past and present."

The small, beautiful and bustling Gulfport and adjacent St. Petersburg, Fl. are where this artist/sculptor, designer has deep family roots, including in some of the bricks laid in Gulfport streets generations ago. Stephen is trained in architecture and earned his master's degree in fine furniture at the Rhode Island School of Design.
The artist has a deep appreciation for the doors to memories and conversation with his father, who grew up in St. Petersburg, that work on the  sculpture inspired.


"My grandfather was amazing. He was a jack-of-all trades who found work wherever he could get it. In the 1920s and '30s, he was a bricklayer and was responsible for laying many of Gulfport's brick streets,." Stephen told the Times.


Stephen delved into the history of Gulfport when he first began thinking about the nationwide competition, offered by the Gulfport Merchants Society last spring.  The competiton was a search for a  meaningful sculpture to grace the area in front of the Gulfport Casino. The pale,aqua blue, historic landmark building  anchors the end of the business district's Beach Boulevard  and has a full view of  the beach and Boca Ciega bay. Stephen listened to community members who remembered the days when the LGBT community members were still struggling with closed minds. In his Gulfport library research he found an old photograph of a building that said "Colored Dance Pavilion," located outside the main entrance to Gulfport. It was a time when his grandfather could lay bricks in the town, but the welcome mat was still rolled up.


"Painful pasts need to be addressed," he told the Times. "Public art provides an opportunity to address them in a positive way."

So, inspired by the community itself, Stephen created an art piece that speaks to the past and the present looking toward the future. Viewers can now experience the description the artist gave to The Times when he was preparing to move from presentation drawings to actually creating " Best Kept Secret." 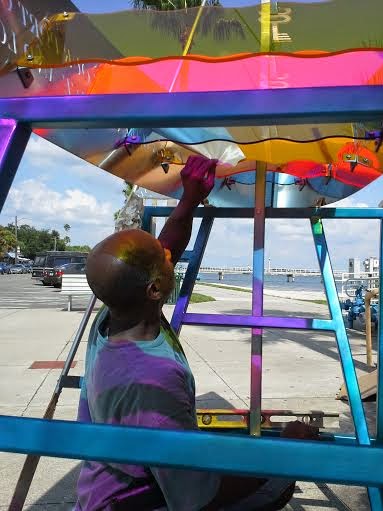 "The metal sculpture consists of a boat raised to eye level on painted stanchions. The boat's aft is in the shape of the Gulfport Casino, and within the arched silhouette of the casino, an impressionist image of the "colored people's dance pavilion." 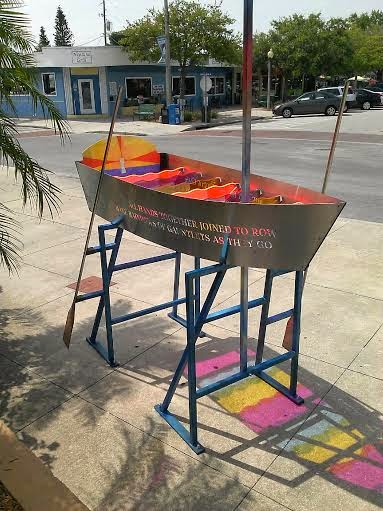 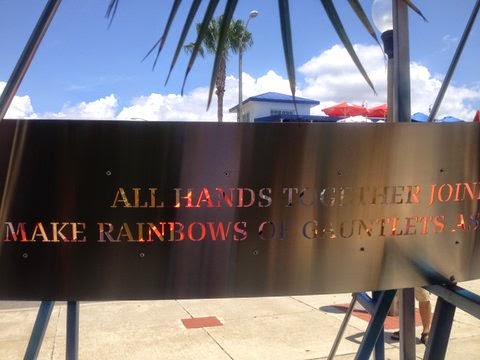 A keyhole cut in the center of this image will offer a play and mixing of colored light created by glass elements inside the boat. A working weather vane will feature Gulfport's initials, GP, and sit atop the central mast. The poem... will be cut into the port and starboard sides."
Tampa Bay Times


As Stephen, completed the installation of the sculpture in front of the Casino, a young boy about 7 years old  passed by and stopped to look at the sculpture. The late day sun bounced light through the slices of colored, gem-like panels in the boat's bottom. 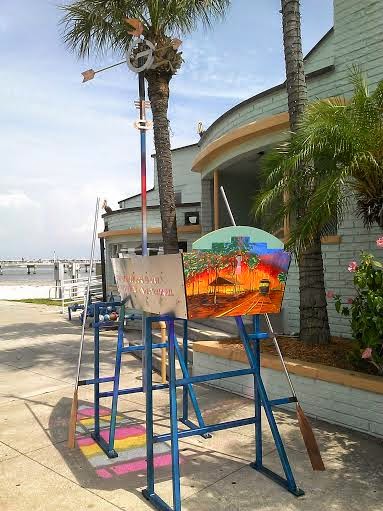 The reflected light painted the ground beneath the boat. Rainbow light.  The boy asked the Artist,


About the Artist: Stephen D. Oliver 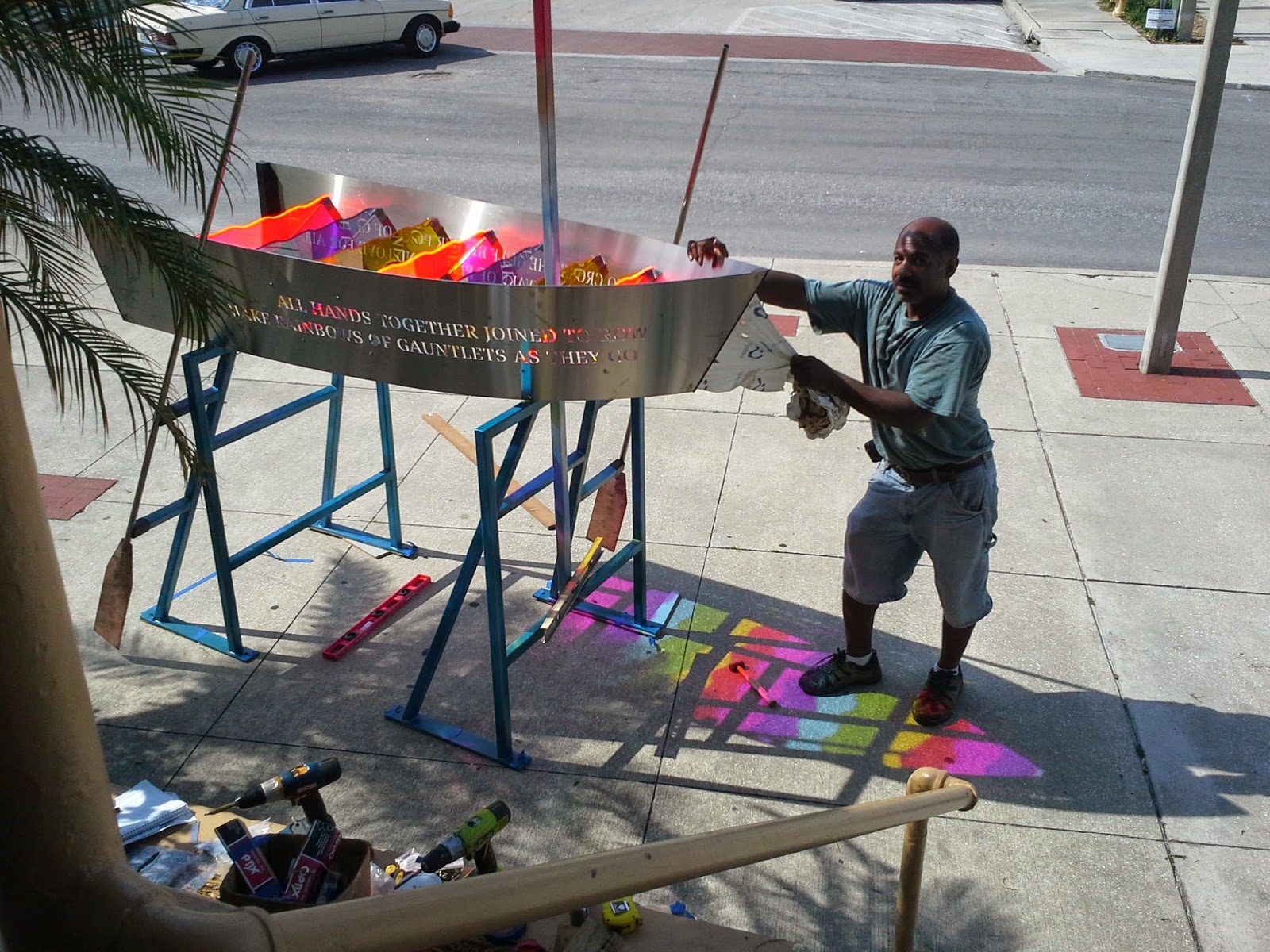 Stephen D. Oliver, MA,  is director and owner of Affinity Arts in Maine where he works in his studio part of the year. In creative and architectural design he has worked with the Portland Children's
Museum, designed the Museum of African Cultures in Portland, Maine and public art for the Convergence Festival in Rhode Island, as well as managing residencies, coordinating programs and public art and designing installations for museums.

Stephen is the designer and creator of the  "Make it Right"  logo that was inspired by the peace sign, the need  to start the conversation again about peace as a part of everyday life, not just nostalgia. The rich colors of his shirts often bring smiles to visitors to his booth at shows or the markets in Gulfport, as well as start good conversations. Their high quality shows his artistic integrity, skill and talent. "Make It Right" can be viewed on his website: affinityarts.info


Posted by maresart.blogspot.com at 9:31 PM